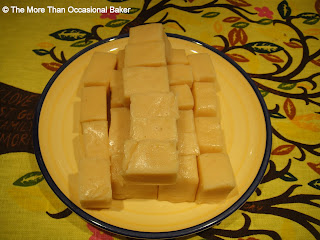 The Best of British has moved from Cornwall to Scotland and I've unintentionally made a recipe that segues nicely from one to the other! The first thing that came to mind was Scottish shortbread but I wanted to make something a little different. I decided to do some market research by asking all the Scots I knew to tell me what treats they enjoyed whilst growing up. Quite a few of them said Scottish tablet. Please excuse my ignorance but I've never heard of it before so I decided that's what I would make. I've been told it can be tricky to make but it wasn't going to stop me trying! I did some research on the internet for recipes and there were quite a few variations mainly around using water or milk and different ingredient proportions. If anyone would like to share their Scottish tablet recipe with me, I would love to make this again properly!

The result - according to my Scottish taste testers - it tastes exactly like tablet but was soft and squidgy like a Cornish fudge. Hmm... I'm not sure what the problem was but I didn't have time to make another batch. Plus these are seriously SWEET and don't even ask how many calories there are in these! I had to check the ingredients list a few times just to be sure and yes the amount listed below is correct!

The Best of British Challenge was created by Fiona from London Unattached and Karen from Lavender and Lovage which will run for 6 months. Each month, a county or region around the UK is selected. To enter, blog about your interpretation of a recipe or dish from that region. The challenge is sponsored by New World Appliances and there is a prize of a £50 Amazon voucher. Last month the challenge was Cornwall hosted by Choclette from Chocolate Log Blog. This month, it's Scotland hosted by Janice from Farmersgirl Kitchen. There's still time to enter as the deadline is 15th July 2012. 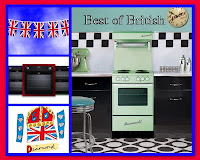 There are lots of recipes and videos available on the internet for reference.
Posted by Baking Addict at 18:36