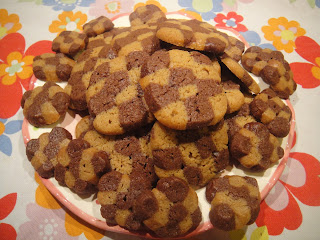 Dom from Belleau Kitchen hosts random recipes which is a great idea to use more of your recipe books. I tend to get recipes online or from other blogs and as my cookbook collection has grown exponentially last year, I really wanted to use more of my cookbooks this year.  The challenge for this month is simple - choose a random recipe from your newest book and blog about it. My newest cookbook is Williams-Sonoma Essentials of Baking. I have to admit I was nervous about joining this challenge particularly with this book as I feared my random recipe would be too challenging. As instructed, I closed my eyes and randomly opened the book to page 42-43 which is Chocolate-Orange Pinwheels and Checkerboards. My first thought was 'oh no, this looks complicated and time consuming!' (Dom - I have to admit I was very tempted to cheat and turn the page but the next recipe is apricot pecan rugelach! Lesson is don't cheat!)
Anyway I decided I would tackle the recipe but only managed to make the checkerboards which to me were more challenging than the pinwheels.  I've never made these before and have always wanted to as they look so cute. I'm glad I tried it but I'm not sure I would make them again as they do require quite a bit of time and patience. They did taste good though so it was worth the effort and the friend that I ended up giving them to really enjoyed them.
The recipe offers a few flavour variations and I chose to make chocolate-coffee for mine. I've probably made it sound more complicated than it really is! Has anyone else tried making these? 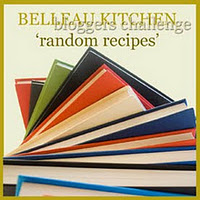 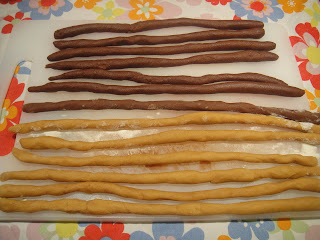 roll the dough into strips (ideally, they should be the same length!) 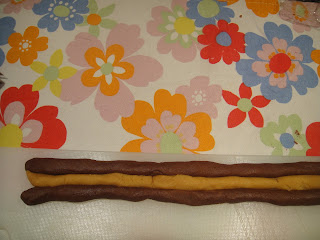 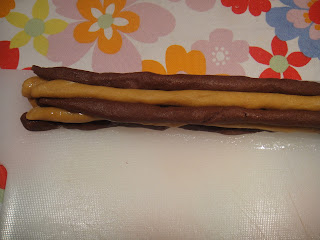 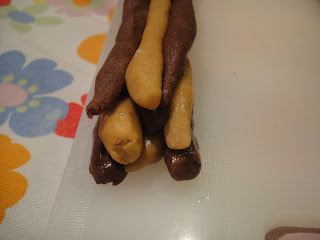 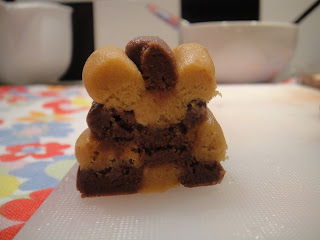 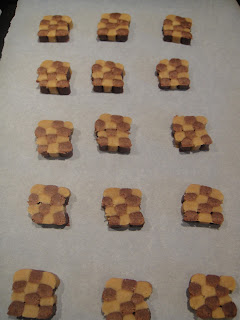 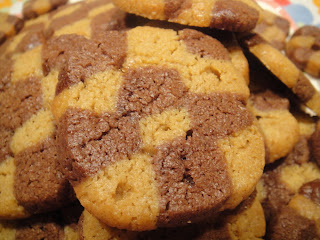 so pleased you can see the pattern! 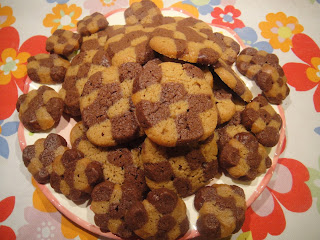 I also made some 'mini' ones as I had some dough leftover - only managed 3 rows with these.

Recipe from Williams-Sonoma essentials of baking