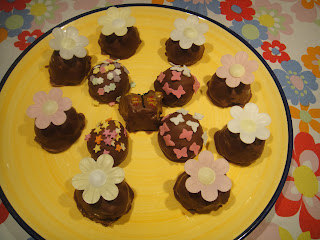 Recently I was asked to make a victoria sponge cake with jam and cream.  No problem I say. Sponges are quick and easy to bake, I don't even have to look up the recipe.  I baked my usual sponge recipe but I'm not sure what went wrong as after I turned it out to cool on the rack, there was hole in the middle of the cake!!

I thought about how I could fix it or what I could do with the cake as it still tasted good! Initially, I thought about making it into a bundt cake and fill the middle with fruits and cream but then I decided to make cake truffles. Quite a few bloggers I know have been raving about Philadelphia Cadbury chocolate cream cheese which I have been dying to try. This is the silver lining so I rushed out to get a tub and proceeded to make cake truffles. I blitzed the cake in a food processor then stirred in the chocolate cream cheese. I used a small ice cream scoop to make balls (using a scoop gives uniform shapes).  I left them to chill for 15-20 minutes in the fridge until firm. Next I dipped them in melted chocolate and topped with sprinkles or wafer daisies.

I also made some star shaped ones using my new star mould which turned out great! I sprayed them gold and wrote happy birthday on them with writing icing as a colleague had recently celebrated her birthday and had been complaining that no-one had made or bought her cake. She was really pleased with these and ate all the stars by herself!

I made a batch with plain cream cheese as well but almost everyone preferred the chocolate cream cheese one. It's really tasty and tastes just like cadburys chocolate mixed with cream cheese! I know that's what it is but there's no other way to describe it. I could quite easily eat it out of the tub. 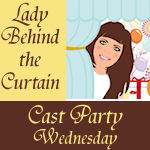 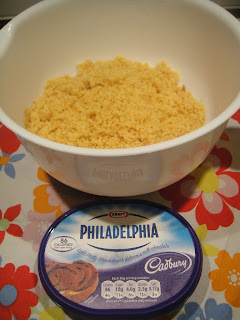 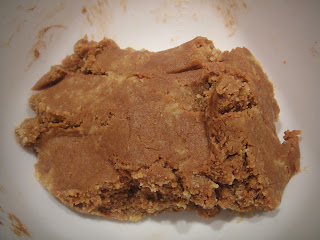 after mixing with the cream cheese 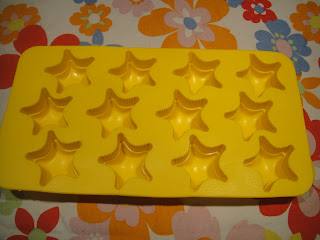 a chance to use my new mould 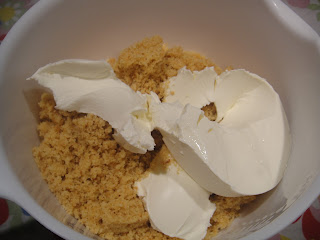 I also made some plain ones 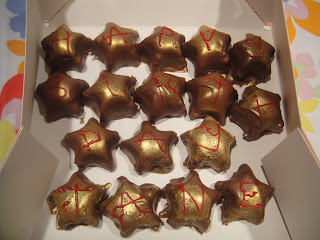 for the birthday girl :) 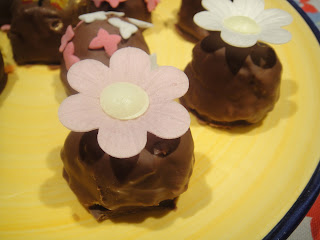 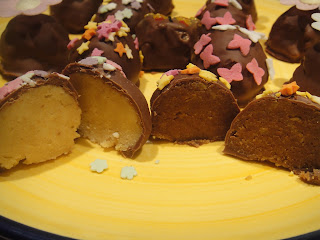