Last weekend, I managed to visit the BBC Good Food Show in Birmingham. It was a really good day out but I was exhausted by the end of it. It was a really busy show and there were hundreds and hundreds of people there! I managed to buy a few foodie items to take back with me but the highlight for me was my "Great British Bake off Experience".  I was lucky enough to book seats for the GBBO theatre. Paul Hollywood and Mary Berry showed us how to make an 8-plait bread and meringue roulade respectively. It was really nice to watch them live having seen them on television earlier that year.
Jo Wheatley, winner of GBBO 2011 and Edd Kimber, winner of GBBO 2010 also come on stage showcasing their meringue roulades. There was an audience vote and Jo won! I took quite a few photos and videos but unfortunately I can't upload all the videos here. I'm not tech savvy and the only reason I can think of is that the file is too large. It won't let me upload certain videos - if anyone can help, I would be grateful and I can upload them later. I have one of Mary Berry showing you how to roll the roulade. 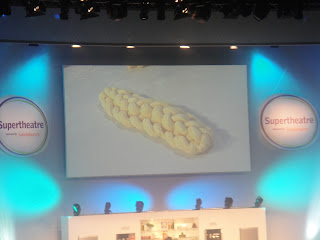 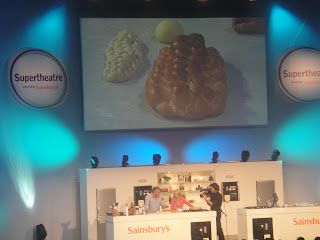 'here's one I made earlier'
This video shows you how it's done. Paul said (jokingly I hope!) that it should be a technical challenge in the next series of GBBO. If you've applied, do take notes :)
"it's tough being a judge" 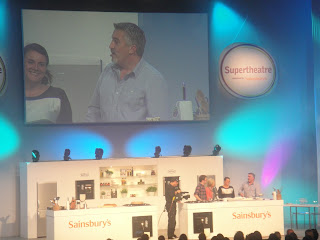 with Jo and Edd on stage 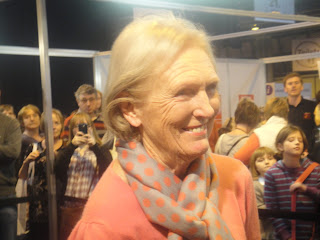 The lovely and talented Mary Berry. I was so excited and pleased that I got to meet her. I was completely starstruck! She and Jo did a book signing where the Q was so long, they had to turn people away as they only had a 30 minute slot! I think they added a second session later in the day though. She must have had hundreds of photos taken of her that day! Jo was just as I imagined from watching her on the show. 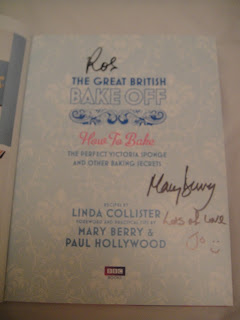 Mary and Jo signed my book :) 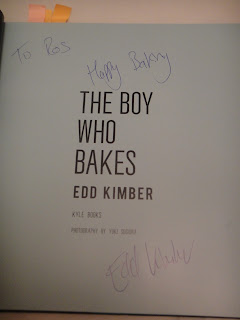 Edd also signed my book and I had a little chat with him. I was quite nervous and starstruck but I got to show him pictures of his cakes that I made and asked for some advice. (I brought my own book hence the coloured tabs) 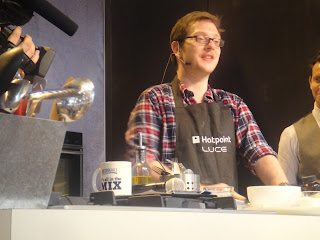 Edd doing a live demo where he showed us how to make blackberry millefeuille and chewy speculaas blondies (below). I got to sample one of these and they were delicious! 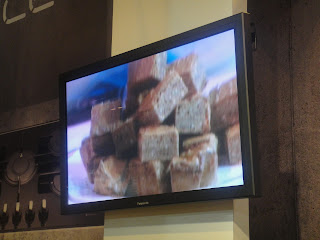 I also visited the Great British Bake Off stall and had a chat to the team there. They were busy recruiting for the new series. Unfortunately, I missed seeing the other GBBO contestants who had been at the stall earlier. I also visited Ruth Clemens at StovesUK and had a brief chat to her. I also felt quite nervous and starstruck but she was really friendly and nice. I didn't take a picture of her though! 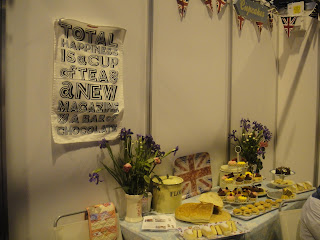 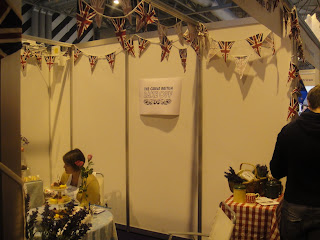 Finally, just before I had to leave to catch my train, I saw Rob Billington demoing a sea salt caramel I think... only stayed for a few minutes :( and in case you are wondering he looks even better in person :) 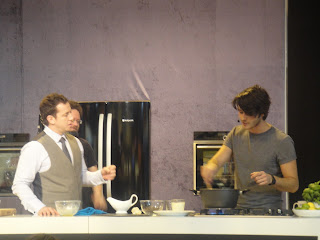 Did anyone else get to the Good Food Show? What did you think?
Posted by Baking Addict at 12:18