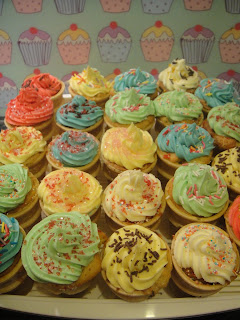 Where does the time go? Can’t believe it was time for Iron Cupcake Challenge again. The theme this month was 'Celebration' as ICL celebrates it's 1 year anniversary. I was thinking and debating what to make for a while. Unfortunately I was too busy to try out different recipes but I bounced a few ideas off friends. Chocolate immediately came to mind, specifically celebrations chocolate. I thought about popping candy but wasn’t sure how to make it work and as I didn't have time to experiment, I quickly binned the idea. I also thought about cocktail cupcakes but I'm not much of a drinker so left this to one side. Clearly other bakers had the same ideas as we had a good selection of these on the night (more on that later)
I then got inspiration from Fiona Cairns book Bake & Decorate (my new fav book) to make ice cream cupcakes. I love ice cream and it definitely says celebration to me :) I also thought it would be really fun and cute. I followed her recipe by making an orange drizzle cake (rather than a plain vanilla sponge) and made different coloured vanilla buttercream frosting. The result was simple yet effective. I made a quick test batch and brought it to work and it was definitely a winner! The cake was moist and citrusy and the cone added a little extra crunch. The frosting was a little sweet but I needed it to be thick so I could pipe it on the cakes.
On the Sunday night when I was baking for the actual challenge, I had quite a few mishaps along the way but fortunately it all worked out in the end. I baked the cakes in the cones and some of them overflowed but it was salvageable. The cake to frosting ratio is good as there's cake all the way to the bottom of the cone. The cone didn’t burn or become too soggy which was also good. However, I created a right mess in the kitchen whilst frosting and decorating. It took ages to pipe the frosting as I only have 1 piping bag so had to wash and dry between colours. By the time I got all the cakes frosted, the icing had dried which made it difficult for the sprinkles to stick. Fortunately I managed to get some on most of the cakes (with a lot of wastage) and I topped with flake bars and cherries just before plating. Next time, I'll decorate as I frost the cakes. (I'm still cleaning the kitchen!)
Next challenge was how to transport the cakes. They were too tall for my cupcake carrier so I tried putting them in cake tins but a few fell over. I ended up using a cake carrier box I have and piped icing on the bottom of each cone to act as a 'glue' I also had to pack one of the boxes with lots of tissue and bubble wrap so the cones wouln't fall on top of one another. It was definitely a challenge and a half travelling through London in rush hour with these cakes. So pleased that most of them made it there in 1 piece.
I was really pleased to win runner up prize in the amateur category :) Quite unexpected! Thank you to everyone who voted and especially to my friends who came to support me. More on the challenge itself in the next post so do check back later.
Back to the cakes.... 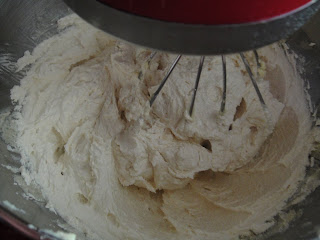 Cream butter, sugar and zest until pale and fluffy 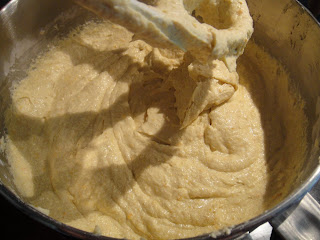 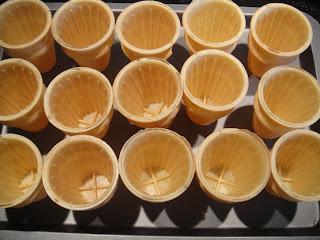 cones waiting to be filled 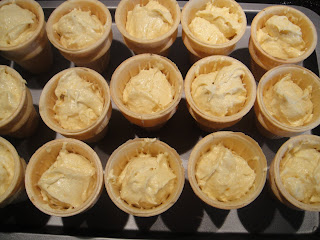 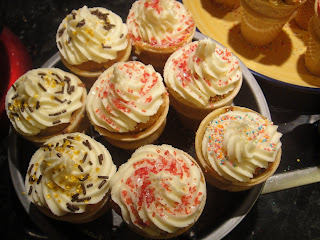 This was the fun albeit messy part :) 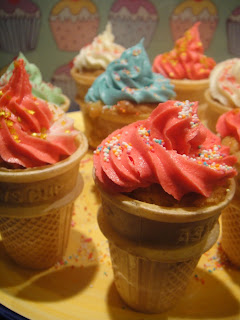 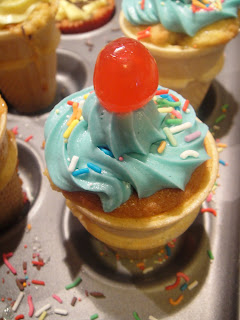 testing out the cherry 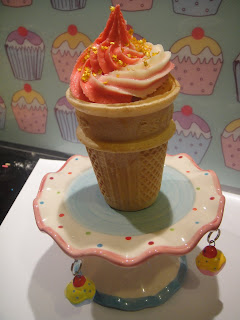 This was a result of me being too lazy to wash the piping bag when changing from white to pink frosting. It made a 'raspberry ripple' effect which i really like. Should have done a few more of these! I'll know for next time :) 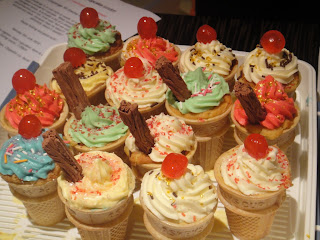 Sprinkles, flake, cherries - anything that takes your fancy :)
To make the cake batter:
To make ice-cream cupcakes:
Posted by Baking Addict at 23:20