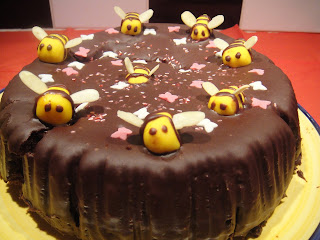 As you already know, I enter a lot of baking challenges so I couldn't really miss out on one of my favourite bloggers challenge - Virtual Valentine Craft and Bake Competition 2012 hosted by cakeboule  The rules are simple, make anything that says Valentine's Day to you.

Last time I made something for a Valentine/love theme was for Iron Cupcake London (which is sorely missed). Back then, I decided I didn't want to make the obvious chocolate, berries, champagne, rose so I made "Tropical Passion Cupcakes" (passionfruit and pineapple cupcake with a lime and coconut frosting) and "It's a Rocky Road to Love Cupcakes" (Rocky Road cupcakes)

However, for this challenge I decided I definitely wanted something with chocolate but what should I pair it with? I had quite a few ideas and then inspiration struck in the middle of the night that I should make something with honey. Honey is a common term of endearment. It is sweet and lovely and pairs well with chocolate and therefore perfect for a Valentine's challenge. So I googled honey and chocolate and the first result was Nigella's Honey and Chocolate cake.  As soon as I saw it, I knew I had to make it including the little bees!!

This is one of my new favourite cakes. It was really moist and slightly fudgy with the delicious flavour and smell of honey.  Often when I use honey in bakes, the flavours are subtle but for this recipe, quite a lot of honey is used in the sponge and frosting so the flavour really comes through.  The frosting is absolutely divine and I could just eat it on its own! Everyone loved this cake and it disappeared so quickly, I didn't have a chance to save some for a friend I was seeing later!

Nigella recommends using yellow marzipan to make the bees but I used Dr Oetker ready to roll icing as I had a box at home. They were surprisingly easy to make! Just roll little sausage shapes and taper one end. Paint the stripes and eyes using the frosting and add 2 flaked almonds to make the wings.

As I made this cake in a hurry and very late at night, I made a few minor errors. I should have waited for the icing to set completely before placing the bees on top as they sunk into the cake. I should also have turned the cake upside down before icing to avoid the dip in the middle of my cake. However, I was extremely pleased with the final result. It tasted really good and definitely had a homemade look about it :)

As this is a Nigella recipe, I am also entering this to Forever Nigella hosted by Sarah from Maison Cupcake 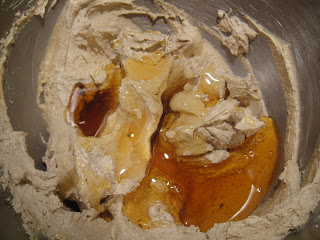 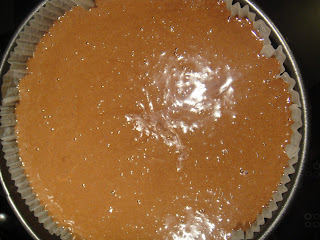 its a very liquid batter - don't worry, it cooks fine! 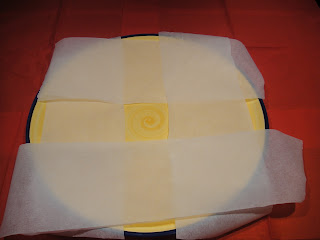 Love Nigella's tip about lining the plate with 4 strips of parchment paper so you have a clean serving plate after frosting! Genius!! 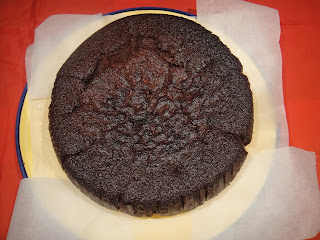 you can see the sunken middle :( 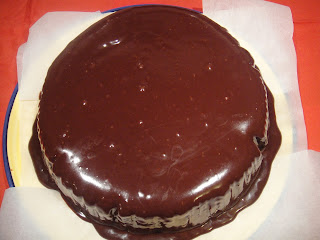 add frosting on top (which hides everything!) and slide the strips of parchment paper out leaving a nice clean plate :) (but caused some cracks as I was doing this as the frosting was so fudgy and stuck firmly to the paper) 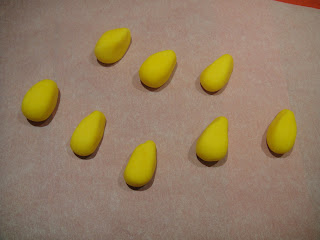 making the bees... this is just yellow ready to roll icing 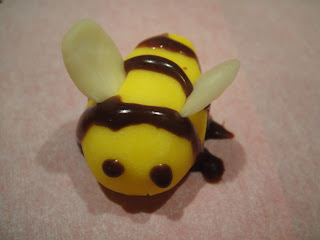 add stripes, eyes and some wings :) 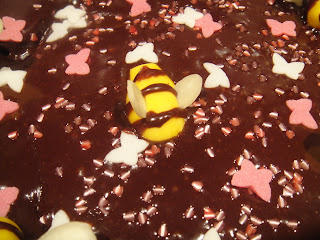 the one that sunk into the cake.. drunk on chocolate honey love :) ps in case you can't tell those are little hearts sprinkled on the cake along with some butterflies 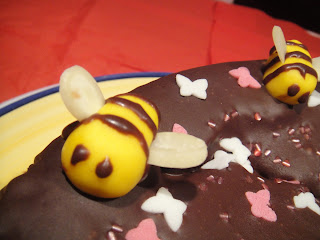 I really love the bees - they are so cute and I'm definitely making this again. 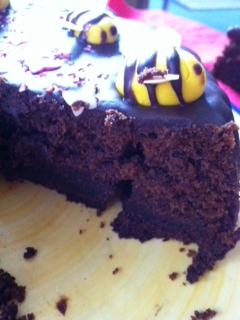