Welcome to the Q roundup for AlphaBakes. It's not the easiest of letters so it was great to see the variety of entries which included sweet and savoury dishes. Tomorrow is officially the start of summer and it will also be the start of June AlphaBakes hosted by Caroline from Caroline Makes. I hope it's an easier letter than Q and one that coincides with summer but we will have to wait and see!

My co host Caroline from Caroline Makes made a Butternut Squash, Fennel and Goat's Cheese Quiche for her new year's day buffet party but had not gotten round to blogging about it until now. It's good timing as it's a delicious entry for AlphaBakes this month. Caroline says that as quiches can be eaten cold, they are great for buffets or picnics or al fresco lunches!

Next is my entry which is also a savoury dish. I made Mini Pork Pies with Quails Eggs. It was my first time working with hot water crust pastry and I was really pleased with the final result. They looked impressive and tasted amazing, much better than shop bought one. The star of course was the Quails egg. I served them with salad for lunch but they are also good for lunch boxes and picnics. 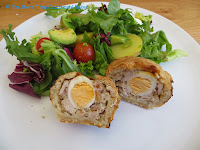 Caroline is back with Ham and Cheese Quesadillas. They are quick and easy to make and she made use of ingredients in her fridge as she was going on holiday to Mexico. A quesadilla is basically a tortilla filled with cheese and anything you fancy, folded over and fried or grilled on both sides. 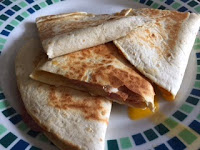 Next is Kate from the Gluten Free Alchemist who baked a Cheddar, Gruyere and Bacon Quiche which is of course gluten free! Her daughter's favourite filling is cheese and bacon which is also one of my favourite fillings as you just can't go wrong with classics. Kate made this earlier in May to highlight Coeliac Awareness Week in UK. 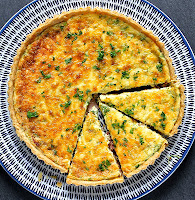 Jen from Chardonnay & Samphire made Roasted Vegetables with Quinoa and Moutabel which is one of her favourite work weekday lunches. The dish is made from quinoa with chargrilled aubergine and tahini stirred through, which is also known as Moutabal/Baba Ganoush and originates from the Middle East. It looks like a tasty and delicious lunch.

Suelle from Mainly Baking made a Cheddar and Jalapeno Cornbread with Quark. She used a recipe from the Fabuloous Baker Brothers which uses quark instead of sour cream or buttermilk which is common in other recipes. It was very cheesy and well spiced and she served it with a spicy ratatouille. 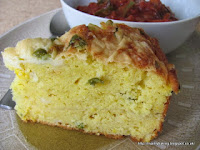 Our first sweet entry comes from Choclette from Tin and Thyme. She was preparing to go on holiday to North Wales so wanted to use up some ingredients in her kitchen which included bananas, yoghurt and eggs. She baked this Quick Banana and Rum Soaked Raisin Bundt which looks really impressive. It was flavoursome as you can expect from the ingredients and had a lovely spongy texture. 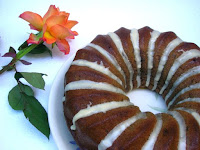 Another sweet entry comes from Jean from Baking in Franglais with her Rhubarb Queen of Puddings. She followed a recipe from BBC Good Food and used rhubarb and ginger. It was a technical challenge on the Great British Bake Off as there's quite a few components to this recipe. The contestants had to make their own jam for the filling, homemade custard and meringue for the top. I think it looks really impressive and I can see why it's called the Queen of puddings. 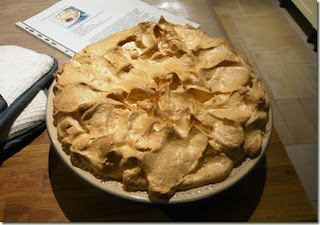 The final sweet entry is from Johanna from Green Gourmet Giraffe. The inspiration came from Pinterest and they were packaged in a hamper of goodies for her mum for Mother's Day. Her Apple Rose Tarts which contain Quince Jelly were packaged amongst other goodies in a homemade woven paper box which was also inspired by Pinterest. 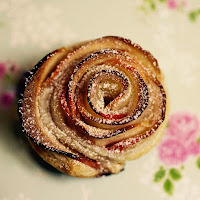 Caroline completes the round up with her Fennel, Quinoa and Broad Bean Summer Salad inspired by Deliciously Ella. She took this to a barbeque party to celebrate her boyfriend's mum's 60th birthday. It's a really colourful summery salad and certainly makes a change from lettuce, tomato and cucumber! 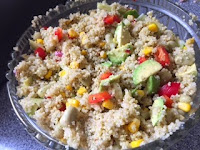 That's the end of the Q roundup. Thank you again to those who joined in this month and apologies for the delayed round up as it's been a crazy busy month. Remember to check out Caroline's blog tomorrow to find out what letter we are using in June and I'll see you all back here in July.