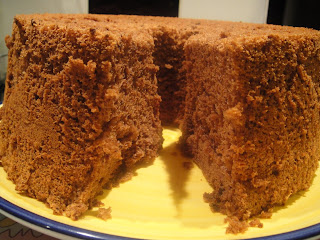 As you can tell, I got a KitchenAid recently. I also have a few other new kitchen gadgets including a chiffon cake tin/tube pan. When I got my new KitchenAid, I tried to make a chiffon cake which failed miserably. I'm glad to report I finally perfected it and it turned out beautifully the second time round. I have the best neighbour ever so I made this as a thank you as she has been particularly helpful lately.

From baking911.com: The Chiffon Cake is its most well-known member of the foam cake family. A Chiffon Cake contains vegetable oil, similar to Sponge Cakes. Since oil is always liquid at room temperature, a chiffon cake stays soft and moist. It is less likely to lose moisture and stays fresher than other foam type cakes, such as an Angel Food Cake.  A Chiffon Cake is made with vegetable oil and egg yolks beaten into the flour and dry ingredients. The fat coats the flour proteins, much like a raincoat, which protect them against the moisture and from forming gluten when mixed. This results in a very tender cake. Although the recipe contains fat, the pans should not be greased.

In 1948 Betty Crocker introduced the Chiffon Cake and hailed it as "the cake discovery of the century!" Up to this point cakes were either the light sponge cake or a heavier butter or shortening cake. The Chiffon Cake mysteriously combined the richness of the butter cake, but with the light spring of the Angel Food and Sponge Cakes.


A California insurance salesman, Harry Baker, invented the recipe in 1927. He baked his cakes in the Los Angeles area and for Hollywood restaurants, but he never divulged the secret recipe. Harry decided that Betty Crocker should share in his special recipe and he traveled to Minneapolis to finally divulge the secret. And the Chiffon Cake was given to cooks across the nation.

I made a simple chocolate chiffon cake mainly because I didn't have any other ingredients to hand and didn't want to run out to the shops. It was really moist and light and not too chocolatey. I'm sure there will be more chiffon cakes coming out of this kitchen soon. My mum made an orange chiffon cake which is amazing so will have to give that a try.

I worked out why it didn't work the first time round - wrong temperature and cooking time (I followed the recipe exactly which is not always a good thing) and also because I didn't leave it to cool in the tin long enough before turning it out. 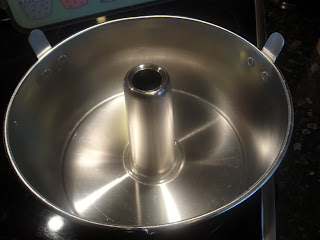 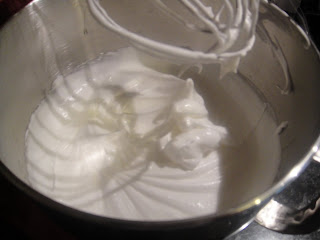 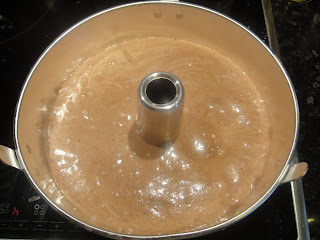 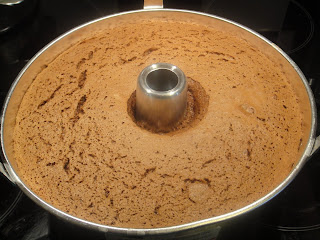 fresh from the oven. So pleased that it rose properly 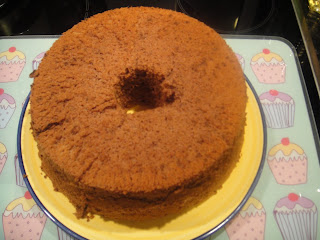 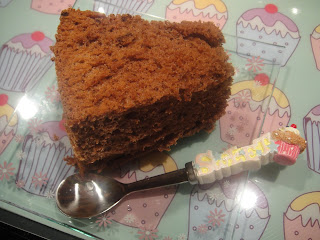