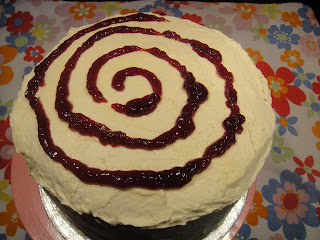 Today is my friend's birthday. I wanted to make an extra special birthday cake for her which we celebrated at the weekend. Warning this is a slightly long, rambly post but it was quite an effort making this cake!
I was really excited to receive my new book The Boy Who Bakes by Edd Kimber and decided I would make something from it. The first recipe is 'my ultimate chocolate cake' and I thought can't go wrong with a chocolate cake and it looks amazing so this is what I will make. Then I turn the page and see raspberry ripple cake. I got really excited and decided that I would make this instead.


Part 1 - the sponge went well. It rose beautifully and I could tell it was going to be light and moist. This recipe requires you to separate your eggs and fold in the egg whites at the end.
Part 2 - frosting. Disaster part 1! This is my first time making essentially what is a cooked buttercream frosting where you have to whip the egg whites then add boiling sugar syrup and continue whipping. I'm not sure where I went wrong as the frosting turned out lumpy and almost curdled? Or like the fat had separated? I don't know how else to describe it. I used fresh eggs from the market and I tested the eggs for freshness before using. Does anyone have any idea/suggestions/tips about this?
However the next morning, I kept whipping the frosting and the white chocolate frosting became nice and smooth but the raspberry half remained slightly lumpy.


Part 3 - decoration -Disaster part 2 - I ambitiously planned to make a sugar collar after seeing it on Lorraine Pascale's baking show on BBC. Sadly, it didn't quite work and yet Lorraine made it look so easy on TV! It didn't really set and as I was running late I decided not to wait and just bring the cake as it was. I piped some jam on top to have some sort of decoration. Sometimes less is more, right?
Fortunately, the cake itself turned out well. Everyone loved it including the birthday girl. It was a really light and moist sponge and I loved the jam between the layers. The frosting was not too sweet and quite smooth. I will definitely make this cake again but probably only for a special occasion as it was quite an effort and when I've left myself enough time. On the plus side, no one has been taken ill after eating this cake!
If you're still reading, thank you for staying with me till the end. It really does end well :) To depart from tradition, I will not be posting the recipe on my blog as I think it would be nice to support Edd Kimber by buying the book and I can definitely recommend it. Don't let my attempt put you off, its not the recipe, it's the baker! Look out for more baking with recipes from the boy who bakes.
HAPPY BIRTHDAY CHARLOTTE!! 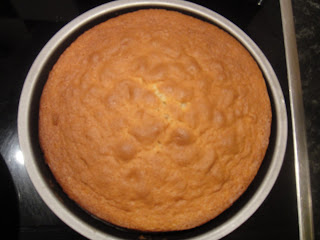 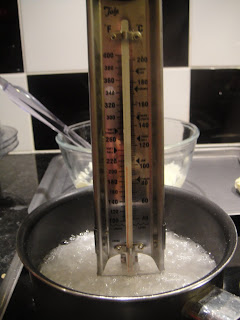 cooking the sugar syrup for the frosting using my new thermometer 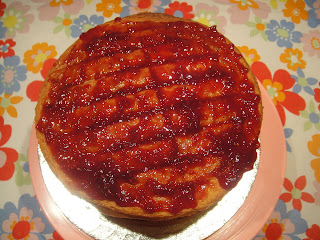 spreading jam between the layers 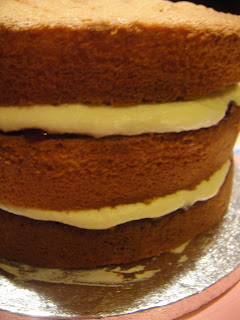 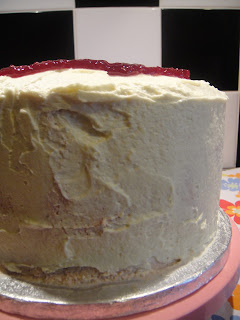 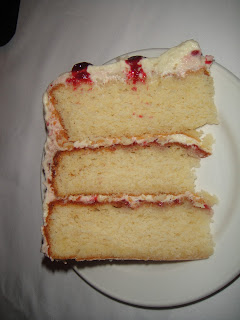 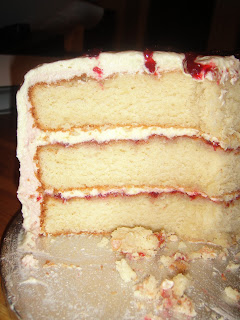 I love the layers! 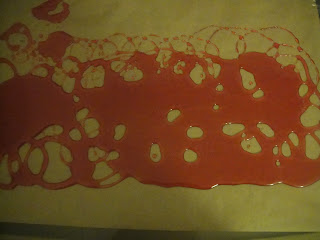 My attempt at 'graffiti collar' for the cake. Perhaps I didn't boil it to the right temperature or just needed to wait for it to set.
Posted by Baking Addict at 22:56